Alive
Betty is a veterinarian who works at Seifar Toy Company, Deal's best friend, and a regular patron at VA-11 Hall-A.

Betty has long dark hair, done up in a sort of ponytail on her right side, as well as brown eyes and fair skin. She is relatively tall with a modest bust. Her outfit consists of a black bodysuit underneath a purple long sleeve sweater and a white lab coat she wears off one shoulder.

Betty has a somewhat irritable personality and has been said to have a "kicking problem" by Deal. She is also incredibly attached to the Lilim, referring to him as "[her] piece o' scrap", and breaking down in tears when she thought he was going to be taken away from her.

She is a lesbian and has had numerous short-lived relationships with other women, usually ending them because of petty problems she has with her partner. Despite this, she feels she may be attracted to Deal, and asks Jill for advice about it.

Betty also enjoys old romance novels and has an entire shelf dedicated to them at home. Although they are generally heterosexual, she claims that they're written in such a way that it is very easy to put yourself in the place of the protagonist.

According to Deal, Betty has a harsh personality that not many people can stand, but that she's also a sweetheart underneath it. Betty usually softens up when drunk, and has been this way since at least her college days.

According to Betty, her grandfather loved his car more than any of his sons and left all his belongings to it in his will.

Betty has had a life-long hatred of puns, stemming from when she was young. Everyone in her family had a penchant for making puns whenever possible, with the exception of her, who tried but was never able to. This made her feel stupid growing up, and when she finally "got" puns, she hated them for being so unfunny.

When she was in high school Betty was charged with a minor sentence of petty vandalism for painting graffiti outside her school saying "Ms. Thompson's a cunt." Betty claims she did this because said Ms. Thompson was constantly humiliating her students and also constantly bullied two of Betty's classmates.

Betty fosters a dislike of cybernetic enhancements. This is due to her days of studying surgery at medical school when five of her classmates used shady means to try and get cybernetic enhancements for their hands. Although she managed to talk one of them out of it, two of them lost their hands, one of them became arthritic, and another died on the operating table. According to Jill, the man responsible for hooking them up was later caught, as was covered by a news story. Betty makes a distinction that she doesn't have a problem with cybernetic prostheses, only implants that drastically improve ability rather than serving as a replacement. She feels the same way about Lilim who needlessly upgrade their bodies.

Betty is present on days two and three of the prologue. She is invited to the New Year's celebrations, along with Deal. 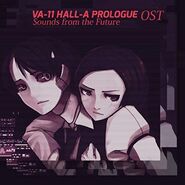 Betty and Deal from the Original Soundtrack cover

Community content is available under CC-BY-SA unless otherwise noted.