It is the most popular brand of computer hardware and software this side of dystopia, and the moe OS for the bartending software used in VA-11 Hall-A and N1-RV Ann-A. [1]

The Operating System was introduced during the 2060s. It's copyrighted "Keeree Joe Group" and a registered trademark of "Banjo Group". Its main colors are white and blue and the logo features a chibi face.

The Operating System used in the bar. It displays the bar's cash, two slots for drinks, 5 different types of ingredients, a mixer and different buttons used for mixing drinks, these being Ice, Age, Reset and Mix.

This bar also features this Operating System, in this case in its 3.0 version. Not much of it has been shown yet, appart from the quantity of ingredient's marker and a "shaking bar".

CaliCOMP also makes phones, Jill using one of them. CaliCOMP gets updates more than any other system in the world; Alma has made a CaliCOMP hack program, and every week she uses Jill's phone as a guinea pig to test her program.

In its early concept, the OS would have allowed the player to add recipes and change the wallpaper, but those features never saw the light of day.

A remnant of this feature can be seen as an alternative pink wallpaper which can be obtained in-game by completing the Model Warrior Julianne Game and clicking on the jukeboxes next to the bar UI. 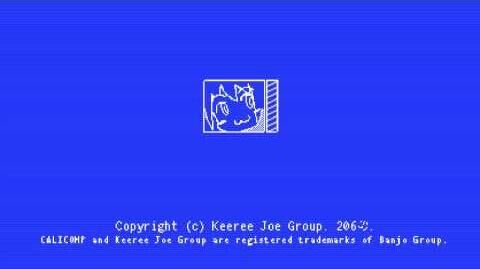 Retrieved from "https://va11halla.fandom.com/wiki/CALICOMP?oldid=5517"
Community content is available under CC-BY-SA unless otherwise noted.