Rebecca Dorothy Willow Graem (otherwise known as Dorothy Haze) is a Lilim sex worker, a close friend of Julianne Stingray, and a regular patron at VA-11 Hall-A. She is a DFC-72 class Lilim.

Dorothy has short, red hair, red eyes and extremely pale (almost white) skin. Her fingers are robotic in appearance, with obvious divots separating each segment. Sei commented this is because her modded hands are designed to shoot Class-5 bullets from her fingertips.

She is always seen wearing a dress with puffy sleeves and red stripes running along its otherwise white fabric. She also wears a patterned hairband in her hair and large red bow just below her neck.

Dorothy appears to have a bubbly, joyful and somewhat flirtatious attitude. She often greets every patron politely and doesn't at any point seem overly aggressive or violent. She takes great pride in her work, often discussing it with Jill and even Streaming-chan at one point. Her kind nature was also shown when she gave up an entire day's work to come visit Jill when she was feeling down, sleeping with her overnight in order to comfort her, all for enough money to "pay for [a] can of soda".

Despite all this, however, on some occasions she experiences bouts of depression stemming from solipsism, a fear of being the only thing in existence, causing her to seemingly "space out" and lose her otherwise cheerful demeanour.

She also demonstrates odd habits at times, as shown when Alma is describing her method of hacking into a company's database, and she immediately goes into a trance, asking Alma to do her procedures, such as "creating a backdoor in her", or "making her buffer overflow." When asked about this, she explains that Alma's choice of words was a form of innuendo for Lilim and her words/behaviour were simply a result of that fact.

Like all Lilim, Dorothy was also programmed with a random character quirk. In her case, she has an irrational fear of dogs and chinchillas. When she walked into the the bar while Rad Shiba was there, her response was to switch over from her usual over the top greeting to immediate screaming.

Dorothy has been a regular at VA-11 Hall-A for some time before the start of the game and typically goes to Jill for her drinks. When you first encounter her in the game it's the day after she's finished her annual paid roleplay as Ingram's daughter. Overall she's in a good mood and asks Jill to serve her favorite drink.

The following are the list of drinks which Dorothy will ask for during the course of the games story (drinks in italic are ones that aren't explicitly asked for but will not be classified as mistakes if given): 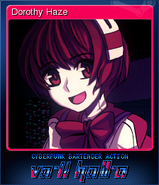 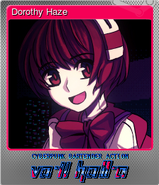 Dorothy Haze as she appears in Girls Frontline.

"Just a cute Dorothy crying. What did you do to her?"

"Just a cute Dorothy laughing at you."
Add a photo to this gallery

Retrieved from "https://va11halla.fandom.com/wiki/Dorothy_Haze?oldid=5833"
Community content is available under CC-BY-SA unless otherwise noted.