Julianne Natalie Stingray, or "Jill" as she is known, is the main protagonist and the bartender at VA-11 Hall-A.

Half-French. Avid smoker. Bisexual. Went to college. Drinks a lot of beer because of her implant that allows her to drink lots of beer and not get drunk. Has a cat named Fore, whom she talks to every time she's at home. She vaguely recalls having seen someone glitch out like how Anna Graem did in the past, but she doesn't remember when or where.

Jill has dark purple hair, and on the occasions where her face is seen, she is often seen with an indifferent expression. Jill has a small bust and is almost always seen in her VA-11 Hall-A uniform, and on the few occasions where she is not (Such as the title screen and when visiting the shop), she can be seen wearing a leather coat over casual clothes. Another time she isn't in uniform is in her room where she wears a green sweater but after her visit with Dana, she wears a sweater with grey and red stripes.

Jill always tries to give her best at work as a Bartender, talking with her clients and always being nice even with the most annoying people; however, she gets angry when somebody calls her "Julianne" in front of her. She always starts her job saying "Time to mix drinks and change lives" and choosing the songs that play at the Jukebox.

Some say Jill tries to play the "cool bartender" but she always says that she's just being herself and it's not an act. Even if Jill is serious most of the times with her clients, there are moments where she just bursts out laughing, usually with childish jokes. She also tends to hide when she cares about something/someone, as shown when she is flustered when she starts speaking for Fore in front of Dana when they were at Jill's apartment.

Apparently, she resembles her grandfather in more ways than one.

In college, she admits that she was too thick-headed and got riled up easily (to a lesser extent now - when she's working as a bartender). Being stressed was her default state.

Jill doesn't go out much, as she spends most of her time at home under the kotatsu with her pet cat Fore, or at the Bar. While at home, Jill browses  Danger/u/, and the Augmented Eye on her phone (tablet?), and later on in the game; *Kira* Miki's blog and the Nano Camo app that she added on her phone (player can also change music, and load/save files on Jill's phone).

In the end, she has a calm childish nature, laughing at the most childish of jokes such as people asking for the drink Bad Touch.

Jill's parents got divorced amicably when she was six. Her mother was a violinist who toured with an orchestra, and consequently spent most of her childhood with her dad, her uncle, and her grandfather. When she was a kid Jill was a huge fan of magical girl series Model Warrior Julianne, in part because she shared a first name with the main character.

Often she would dress up and pretend to be the main character, however when she entered middle school she was constantly teased about her love of the show with classmates often humming the theme song at her behind her back. This lead directly to her displeasure at being referred to by her full first name, although she says that it hasn't diminished her love of the show any.

While in middle school Jill started wearing all black and got into occultism, even going so far as to write a blog about it under the username "Shadowmaster69." This blog would become an old shame for her later in life and she would do her best to hide it, although Alma manages to track it down.

When she was in school, she would always get high grades despite not putting a lot of effort in. However, once college happened she had to study really hard to get good grades.

Three years ago, Jill had a girlfriend named Lenore. Jill met Lenore at college and helped her during her studies and bonded as friends. When they realised that they both liked each other, they started going out. They both loved each other, and during the time Jill spent with Lenore, Jill became a sister-like figure to Lenore's younger sister, Gaby.

In the moments before she graduated, Jill had a lot of doubts about whether or not the degree she studied for years was right for her and if she wasted her time doing it. A couple of months after Jill graduated, she received an offer to start working at a big research facility. Lenore was ecstatic, and really proud of her, but Jill hesitated and later, rejected the offer because she didn't know what do from here, but taking that offer was not one of them. Lenore freaked out, later confessing that she was jealous of Jill since she never got such a chance. Things devolved pretty quickly, as Lenore accepted the job offer on Jill's behalf without letting Jill know beforehand. Jill was furious with her, and with both of them saying one too many things, Jill stormed out of Lenore's house, breaking a vase in a process. They haven't spoken since, and thus, they haven't officially broken up (but considering the time they haven't seen each other, Jill calls Lenore her ex-girlfriend).

Afterwards, Jill applied for a bartender license and wound up working at VA-11 Hall-A.

Jill has a dream of Anna who explains the game's about to start and Jill needs to make a good first impression for the player. Before she wakes up Anna tells her she should check the parcel she just got. When Jill wakes up she dismisses the encounter as just a dream but finds a parcel near her door. 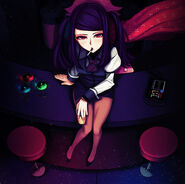 Jill, as seen in the source image for her official steam trading card. 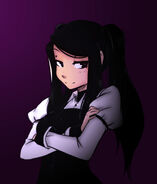 "Can I have a copy? Mom says she doesn't have any nice recent pictures of me"

Make sure your profile is a smoking area.

Just a cute sleepy Jill. She may dream something happy!

Add a photo to this gallery
Retrieved from "https://va11halla.fandom.com/wiki/Julianne_Stingray?oldid=5795"
Community content is available under CC-BY-SA unless otherwise noted.