She first entered VA-11 Hall-A because she wanted to go on a wild adventure in the seediest bar she could find.

Streaming-chan is an average sized girl with a modest bust. She has long, dark, brown hair, a tanned complexion, and heterochromic eyes (right blue, left green.) She wears a white undershirt, a black choker, brown fingerless gloves, a brown jacket with an antenna of some sort sticking out of her backpack, and a white baseball cap (bearing an image resembling a character from the video game Cavern Kings) with a webcam mounted on top so she can stream her life at all times.

Streaming-chan has an extremely high energy and extroverted personality. She has no qualms about streaming her life 24/7, including her sex life (but only to premium members) and for her every day is an adventure.

Streaming-chan comes by the bar on Day 4, where she's looking to have an escapade in the "shoddiest, nastiest, smelliest, ugliest bar" she could find. When she gets inside she complains that despite its outward appearance, VA-11 Hall-A is actually half-decent on the inside. She's further disappointed when she finds out that Jill and Gillian are the bartenders. She had hoped for a hot shirtless guy who flirts while serving drinks and with and a scantily clad girl jiggling all over the place and instead got "[Jill and Gil], dressed like fucking waiters?!". Jill and Gill respond with "Yep," and "Seems that way" respectively.

Since it's her peak viewing hour on a Friday, Streaming-chan says she needs something sexy to keep her viewers instead. Since it's too late to go somewhere else and decides to take matters into her own hands. She asks Jill to serve her the biggest, nastiest drink that she can think of. Once Jill's served her her drink, Streaming-chan proceeds to jug it in one go. When the sensation finally hits her, Streaming-chan muses out loud if what she's feeling is what it's like to be kicked in the balls. She then decides that in order to keep her viewers entertained that night she'll just get really wasted.

Immediately she asks Jill if the bar has any interesting stories.

She comes by again on Day 18, curious about the huge spike in viewership she got after she passed out. If you've gotten her drinks right up to this point she gives you a copy of her theme music, "Go Go Streaming-chan!" 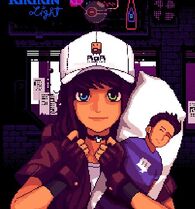 Streaming-chan with a Dakimakura.
Add a photo to this gallery

Retrieved from "https://va11halla.fandom.com/wiki/Nicole_Chen?oldid=5122"
Community content is available under CC-BY-SA unless otherwise noted.