Alive
Stella Hoshii is the daughter of wealthy parents and a regular customer at VA-11 Hall-A. She is also a Cat Boomer and a long time friend of Sei Asagiri.

Stella appears to be an average-sized girl with fair skin and red hair, styled into flashy drills. Although her breasts appear to be fairly average-sized for her height, Sei reveals that they're much larger than they appear, and she has no idea how she hides them so well.

Her two most defining traits, however, are her prosthetic right eye and the cat-ear-like protrusions on her head. Her outfit consists of what appears to be a red leather dress and black arm warmers, as well as a golden cross necklace around her neck.

She often acts in a prideful manner, shown when initially meeting her, and when Sei isn't around. However, she's a kind person at heart, as shown during Mega-Christmas when she buys a large amount of gifts for the children in her family.

She also hides her true feelings under her usual haughty demeanor, as evidenced when when Sei was heavily injured at the Apollo Bank incident. It is also evidenced in a more lighthearted manner when she often tries to hide her status as a fan of *Kira* Miki's music, as shown from her reaction upon seeing *Kira* Miki's signed glass.

Stella is self-conscious of her breast size, thinking them too big. To compensate for this, she somehow tucks them in to reduce their apparent size, in addition to adding the "drills" to her hair to distract from her chest. Even though she goes to such measures to hide her chest size, she doesn't want to go through a breast reduction procedure, as she feels it would be betraying to her mother, who is prideful of her chest and shows it off as a sign of confidence.

Conceived by wealthy parents, before Stella was born she was diagnosed with Nanomachine Rejection, a potentially life-threatening disease. As such, she was forced to go through genetic treatment by doctors and become a Cat Boomer, called so because of the cat-ear-like protrusions which appear on the heads of those who receive treatment. She did survive because of this, and thus grew up in a rich environment where she received anything she asked for.

At age 5 she asked her father to take her to a "real kids park", where she met her soon to be best friend, Sei. The two formed a close bond and began to meet at the park regularly, until one day while they were there, a rogue White Knight took them hostage, on the run for undisclosed reasons. After being approached by the authorities, he began to gouge Stella's eye out and kicked Sei in the chest after she attempted to stop him, breaking several of her ribs and rupturing her organs, as well as knocking her out.

Afterwards, Sei briefly regained consciousness to see the White Knight on the ground, not moving, whilst another had her slumped over his shoulder. He put his helmet over Stella's head and the two were quickly taken to the hospital. Sei was placed into emergency care due to the severity of her injuries and only woke up after Stella began punching her leg, telling her to do so. The two of them recovered eventually, but Stella's right eye had to be removed and replaced with a prosthetic one.

The following are the list of drinks which Stella will ask for during the course of the game's story(drinks in italics are ones that aren't explicitly asked for but will not be classed as mistakes if given): 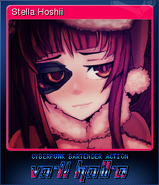 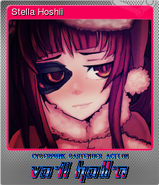 Stella, as seen in her official Steam trading card.

"W-Where in hell did you get this photo of me?! DELETE IT, NOW"

Bringing some class to this place.

Retrieved from "https://va11halla.fandom.com/wiki/Stella_Hoshii?oldid=4897"
Community content is available under CC-BY-SA unless otherwise noted.